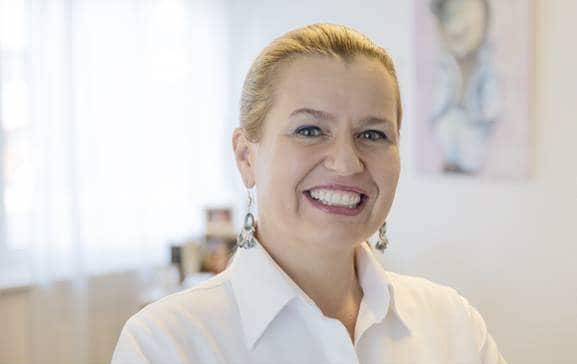 Dr. Austin is an International Doctor of Chiropractic that has practiced in America, Asia, and Europe for the past 17 years.

She is the personal Chiropractor of Olympic Gold Medalist Joseph Schooling who beat Michael Phelps in the Rio Olympics in 2016. In addition, she was Peak Performance Chiropractor for the National Swim Team in Singapore before she relocated to Marbella.

Dr. Austin is an Austrian-born, American-educated Chiropractor who has over 17 years of experience, after graduating from Southern California University of Health Sciences, in 2005.

Her first degree was a Registered Nursing Degree in Neurology and Psychiatry from LKH Rankweil, Austria, followed by a Bachelor’s Degree in Sports and Exercise Science from California State University Northridge (CSUN). It was during her studies at CSUN that she suffered from excruciating back pain for 6 months. It was then that she decided that she wants to help other people with these kinds of problems.

She dedicated her life to helping thousands of people to live a better quality of life and improve their sports performance.

She also has/had  the honor to be:
Schedule Your Appointment Now

What makes Dr. Inge so unique?

Besides extreme finesse and talent, she has developed her own chiropractic technique, which was developed from thousands of different adjustment styles. She picks and chooses exactly the right adjustment, for the right person, so that everyone gets exactly what they need.

She has helped thousands of people with back pain, neck pain and headaches to live better lives and perform better. You can be next. Simply click the link below to make an appointment. 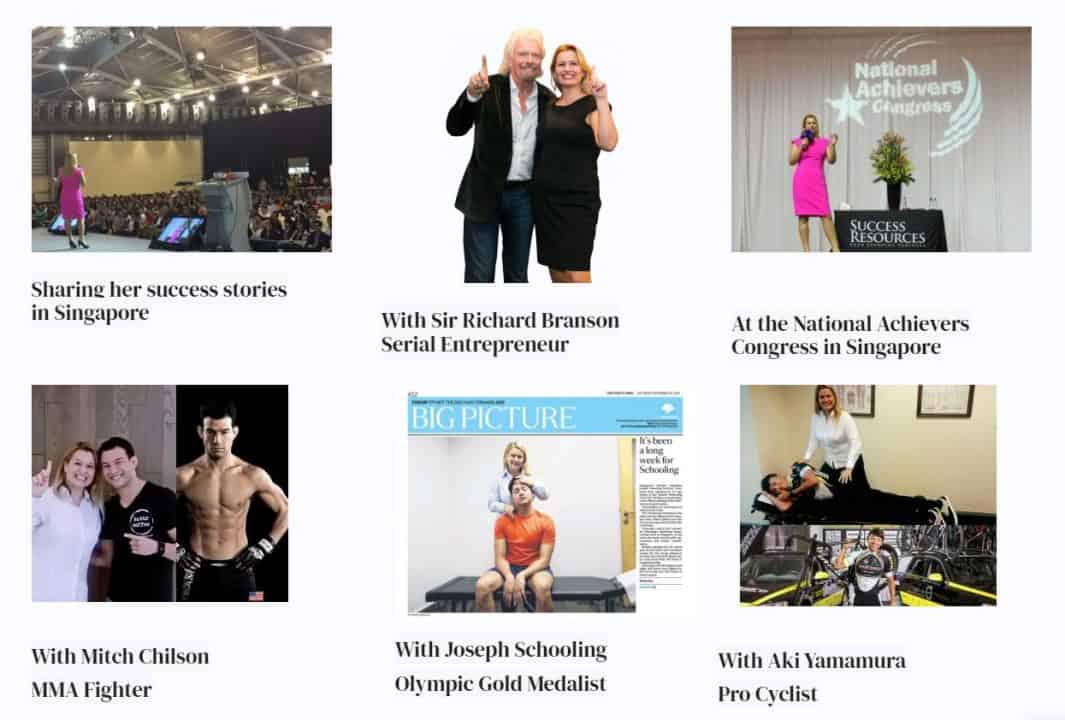 What Our Patients Have to Say In Singapore

Joseph Schooling
Inge is a gem. I love her unrelenting work ethic and desire to help me achieve my goals to the highest level. Her technique and instinct is second to none. Having her on my team, especially during the Olympic year, gives me the confidence to perform up to my standards. Always a pleasure working with this fantastic human being. 1 billion stars!
Read more

Mottzo
Inge has really helped my neck issues over the last year and is ideally located in the CBD. She is incredibly flexible so can fit in with your work schedule! I would highly recommend her if you are looking for a chiropractor.
Read more

Jessie Ong
I was in severe left foot pain for more than a month, left leg hip down to foot loss it's mobility, left foot tingling numbness, hardly sit nor stand and not mentioning the pains that I have to endure. My dil parents recommended me to Dr. Inge. Understanding my situation, I also honestly told her I had slip disc ops in 2004 before, she briefed before she proceeds with her treatment. I should say she has a pair of magical hands, with her magical touch, my left leg gains it's mobility. Dr. Igne, I greatly appreciate your treatment, how could I thank you enough for your pair of magical hands to bring mobility back to my leg with only one treatment session.
Read more

Kaitlyn Choo
I woke up one morning with severe neck pain that spread to my shoulders and gave me a migraine. As the pain did not dissipate over 2 days, a friend recommended I see a chiropractor. From the first session with Dr. Inge, my pain was significantly reduced and I immediately recovered some range of motion in turning my head. Over three sessions, the pain was completely gone and has not returned since. While I had some hesitation in seeing a chiropractor due to fear that treatment would be painful, Dr. Inge's sessions were entirely painless and very relaxing. I was always at ease due to her professionalism and expertise. In addition to alleviating my pain, she also helped to relieve tightness in my shoulder that I developed from long hours at a desk bound job that has plagued me for years. I have since recommended Dr. Inge to others who have had similarly positive experiences.
Read more

Bok Angie
I have been suffering from numbness on my entire body and stomach bloating for years. Because of these problems I have not been able to sleep well. Medicines, acupuncture, massages only temporarily relieved the discomfort. It was amazing that I have significant improvement after a few treatments and I am losing weight as well. I am very pleased with the results. Thank you Dr. Inge. You are a great chiropractor.
Read more

Peter cheahks
My wife , irene had been suffering from migraine for more than 30 years and recently she experience severe headache and numbness on the right hand. After numerous visit to medical practitioner and chinese sinseh. Her condition did not improve. She was very upset and disappointed untill when she introduced to Dr. Inge of paramount chiropractic. Her condition improve on the first visit and tremendously on subsequent visit. Only with 5 visit ( therapy ) , she had recovered. Headaches , numbness and migraine all gone. My wife and I would like to take this opportunity to thank Dr. Inge for her excellent service and would definitely recommend her professionalism to others. ﻿
Read more

David Chua
I was very happy with the services of this chiropractor since i have been traveling in an out of Singapore for years, it was difficult to find someone i could count on at a last-minute notice. I was able to get an appointment right away, and I received prompt and professional services to treat my pinched nerve. If i am back in Singapore and need a chiro, i will be back.
Read more
Schedule Your Appointment Now

What Our Patients Have to Say In Marbella

Golden Mile Chiropractic
5.0
Based on 5 reviews

Abhijit Raha
09:19 12 Sep 22
Dr Austin is a " miracle healer", even for Olympic athletes. Look no further if you're in need of an accomplished chiropractor.

ming cheung
08:01 10 Sep 22
Highly recommended, Dr Inge has helped me for years as I struggle with lower backpains. As a triathlete she has helped me to prepare before and recover after the races. She understands the mindset of athletes very well and has tons of knowledge on nutrition, posture, mental health and the human body.

Kimmy Lee
07:48 08 Sep 22
Dr Igne went the extra mile to come back to her office on a weekend to see me as I could not make it on a weekday after giving birth.The pain in my back was so intense that I could not sleep and had difficulty getting up from bed.She patiently explained to me about my scoliosis condition and the treatment needed. 5 stars for her passion, attitude and service!

Charly Brandt
11:45 06 Sep 22
Thank you Dr. Inge for helping me. Before I saw you I was suffering from constant back and neck pain. You also helped a Good friend of mine who was suffering from strong Headache and now he is finally able to sleep through the night and be more performant on the golf course. A big thank you from him too ! I will recommend you to all my friends in Marbella!PS: I also love your online booking system.

OEI AISOEN
11:20 05 Sep 22
I have been to many Chiropractors, but I have to say Dr. Inge is top-notch! Highly recommend her to anyone suffering from back pain. she fixed me up in just a few visits and the treatments felt really great. Thanks Dr. Inge !
See All Reviews
Schedule Your Appointment Now
This website uses cookies to improve your experience. We'll assume you're ok with this, but you can opt-out if you wish. Cookie settingsACCEPT
Privacy & Cookies Policy

This website uses cookies to improve your experience while you navigate through the website. Out of these cookies, the cookies that are categorized as necessary are stored on your browser as they are essential for the working of basic functionalities of the website. We also use third-party cookies that help us analyze and understand how you use this website. These cookies will be stored in your browser only with your consent. You also have the option to opt-out of these cookies. But opting out of some of these cookies may have an effect on your browsing experience.
Necessary Always Enabled
Necessary cookies are absolutely essential for the website to function properly. This category only includes cookies that ensures basic functionalities and security features of the website. These cookies do not store any personal information.
Non-necessary
Any cookies that may not be particularly necessary for the website to function and is used specifically to collect user personal data via analytics, ads, other embedded contents are termed as non-necessary cookies. It is mandatory to procure user consent prior to running these cookies on your website.
SAVE & ACCEPT